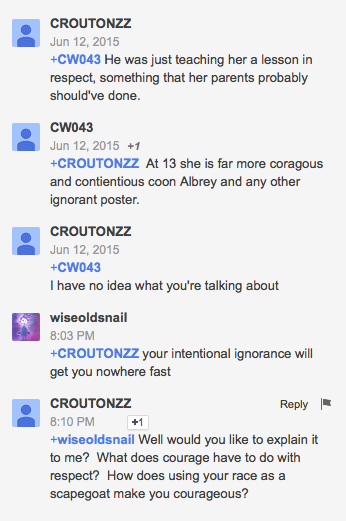 i don’t know why i bother

i don’t feel inclined to engage with you at all, since you seem to believe that police have the right to teach a child a lesson by using violence against that child

police are not that child’s daddy, and have no authority to ‘teach her a lesson in respect’

police have no authority over us without being able to show probable cause to ticket a driver or otherwise make an arrest or keep us away from imminent danger . they have the right to inquire whether we’re willing to talk with them, not force us to stay and talk with them . my children were taught to not talk with police, at all

if casebolt wanted to teach a lesson in a legal manner, he could’ve RESPECTFULLY asked if any of the kids were willing to talk to him about what had occurred . another officer was doing exactly that and having perfect success . in fact, casebolt assaulted the kids who were voluntarily talking with the other officer

that girl showed the courage to have self-respect … to stand her ground (while she was attempting to get a ride home, and possibly afraid to leave her innocent friends in custody of a lunatic cop) … to know that she is not a subject in the kingdom of casebolt, nor a subject in a police state . she had the courage to tell that cop that he was wrong . many of the kids showed that same courage

you sound like the type of person who doesn’t have that courage, and would stand back and allow a cop to beat someone just because the one delivering the beatdown is wearing a costume and carrying a badge . you insinuate that you are obedient . that’s your choice to be that, but you are not required, by law, to be obedient . also, you being obedient when you’re not legally obligated to be so only feeds the illusion to police that we agree to allow them to lord it over us . they only have that power if we give it to ’em

why would you want to do such a thing?

let me clue you in : there is a reason plenty of towns are going broke paying out lawsuits for police brutality . this is one more chance for you to learn that it has to do with the law and our rights being violated by police . tens of millions of dollars go to police brutality ‘settlements’ in my town . that’s tens of millions of dollars on top of the more than quarter of the city budget being paid to police in the first place . this is not a problem in only my town . it’s a problem across the board from coast to coast, canada to mexico

and fyi, i’ve repeatedly had my rights violated by police, was not convicted of any crimes from those incidents, and i’m an old half greek pale skinned woman

so … your wrong assumption makes your conclusions wrong . i don’t use my race as a scapegoat (and that sentence of yours makes no sense whatsoever)

who brought race into this? the two grown women and ‘security’ man who were yelling racial epithets, or the kids? one of the grown men who was part of this has a record for mutilating and murdering animals . seriously . is that who those kids should obey?

another clue : calling out racism isn’t a racist act . racism is real . these three white supremacist adults in this video … four, including casebolt, exhibited a stream of racist acts . they were practically a public service announcement giving the perfect examples of how to be racist . some of those acts were caught on film, some weren’t . some of those acts were illegal, and some were just ignorant and mean

this isn’t about your opinion or my opinion . there are definitions of words

racism is the systemic oppression of a group defined by their race, skin color, or ethnic heritage … by the group holding political, economic and physical power . in this country, only white people hold that power over others

it’s true that i hold prejudice against police as an institution, and against racist fucks and individual criminal cops and police state cheerleaders

it is racist to yell racial slurs . that’s just the way language works . that sentence is a true statement . it’s child abuse to yell racial slurs at children . based upon testimony from multiple people . that occurred and it was a racist act . when an older teen, a very young adult, stepped in to try to get the racist rant to stop, one of the women slapped her . this happened . it was a hate crime . she wouldn’t have called the children those names had they been white, and she likely would not have slapped a white person of the same age, though women like her are difficult to assess

if police had arrived during a fight, they would’ve been legally justified in breaking up the fight (without harming unarmed people in a tussle), and even handcuffing the three women who were fighting . they would have been justified in asking questions about what had occurred, but would not have the authority to make anyone answer … no authority to detain anyone who isn’t fighting when they arrive

nobody was fighting when police arrived

three grown white people who had lodged racist epithets then proceeded to point out kids they wanted to have illegally grabbed by police . they were, in effect, lying to police … which is a crime i had forgotten to notice ’til right now . they basically filed false police reports

regardless, police still had no legal authority to force compliance, as kids were leaving after being accused of ‘trespassing’ . one cannot be arrested for ‘trespassing’ if one isn’t on someone’s property with that person being the sole authority on who can stay … ie other residents of the neighborhood had invited the kids, giving that women no more authority than other residents to determine who could stay or who had to leave

if you were my roommate and i brought five people over for dinner, you couldn’t call the police and get them to evict my friends . that would be illegal for you to try, and more illegal for police to fulfill your request or demand

this situation is a very clear example of casebolt and the other adults making choices based upon the skin color of those they chose to attack . they made choices, and should be held accountable

they each should face a jury of their victims’ peers